Day One is Done 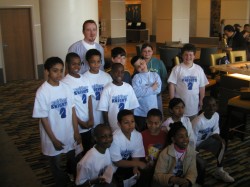 One day (and two games) down. Two days (and five more games) to go. Julie finishes the day batting .500 (courtesy of a forfeit by a no-show opponent in game two), and feeling much better physically. Tomorrow is the marathon day, with (potentially) twelve solid hours of chess–three games, each of which can be as long as four hours (although realistically, for these players, two hours is a long game…Julie’s game one was a little more than an hour and a half, and that was the longest of any of her team-mates). I’m trying to document with photos (see them on flickr–I’ll try to update the set each day) and a podcast is still a possibility.