Published by Joseph Ugoretz on April 9, 2005

Well, not only childish, but actually children. I’m with my daughter and her team at the 2005 US Chess Federation Supernationals III Tournament in Nashville, Tennessee. The team (the PS 282 Royals) is doing quite well. 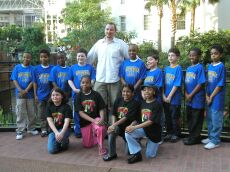 This is no powerhouse team, it’s only their second year and first trip to this level of tournament, but they’re playing right up there with the big winners. And it’s a team of boys and girls (more boys than girls–that’s a problem in the chess world, and one that needs more attention than it gets, but there is some effort at least to address it. I’ve discussed it with several other more experienced chess moms and dads this weekend) who really demonstrate the diversity that makes NYC, and particularly Brooklyn, and more particularly PS 282, so great. Most of chess outside of NYC is a white world (and some Asians), it seems (mostly–there are two Native American teams I’ve seen, and a Black team from Detroit). These kids are teammates, and that means a lot to them. Some are stronger players, some are weaker, some are sweet, some are obnoxious, but they care about each other and they care about their team. Even I’m feeling warm towards even some of the obnoxious ones!

So far, there has been vomiting, diarrhea, and stomach pain, headaches, tears, bloody lips, and tantrums, but no actual fatalities. It’s an imposing (frightening?) sight to see 5,200 children, all playing chess, all discussing their moves and strategies, as well as running, wrestling, screaming, overeating, swimming in the pool, and whining like other children.

I’m a proud parent–not just because she’s winning (which she’s not, much) but because she’s competing with such a positive spirit, and working so hard, and bonding with her team-mates. Today, after a very hard match (the fifth in two days) which ended with a loss at about 30 minutes past her normal bedtime, I told her that if she was too tired, she could skip analyzing the game with her coach (a normal part of the routine), and just have ice cream and go to bed.

“No, Dad,” she told me. “I think I played poorly this time, and I want to learn from this game. I’d like to analyze it with Mr. O. That would help me learn.”

If you’ve ever seen a dad so blown away with pride he swelled up like a blimp…that was me.