I had a great time talking to the guys at the Vassar Talk Tech radio broadcast (WVKR 91.3) this week. Not only did I get to talk about eportfolios (always good), but was able to stay and discuss the iPad.

Coming this Saturday, and it should be a great day. I’ll be on the roundtable on the future of WordPress in Education, and presenting my own eportfolio spiel:

Eportfolios are (too often) seen as tools for assessment, for assignments, or for career placement. But thanks to WordPress and BuddyPress, at Macaulay Honors College, we’ve been able to set up an entirely flexible and free tool, allowing students (and faculty, and instructional technology fellows) to redefine the term “Eportfolio” and to let them each create a “Cabinet of Curiosities” or a “Museum of Me,” which promotes reflection, interaction, and truly integrative learning. These eportfolios are student-driven and student-designed, and the flexibility of WordPress allows us to watch as students forge new paths, and create an eportfolio model which is new in higher education, and which has the potential to work for students beyond the classroom, beyond the college.

This, lightly edited, is the email I sent to my family in other places on September 12, 2001.

I was in the subway when the first blast happened, and some people got on my train and started talking about a plane crash and brushing broken glass from their clothes and hair. I pretty much ignored them. Then I got out of the train at City Hall and started walking across town. I heard a lot of sirens and a helicopter and at the next intersection I looked up and saw the flaming hole in the first WTC building. I looked back down and started walking quick to work at BMCC to call Beth to tell her to stay home (cell phones were not working, pay phones had long lines, people were running up the street crying).

Then I heard an echoing explosion, like a series of 3 or 5 loud rippling bangs, and I looked up and saw the huge cloud of smoke and flame (and large pieces of debris–people next to me said they saw people falling in the air, but I don’t think I saw that–not clearly) coming out of the second building.

I ran to work and called Beth–I wanted to tell her to stay home, because the subways would be a mess. At that point I thought it was just something like a gas fire. Somebody told me that a plane had crashed into the WTC, but I didn’t really believe it.

Then they started evacuating the college.

I walked out the North Entrance (about eight blocks north of the WTC) and saw two of my students, one crying and both pretty freaked out. I started walking with them, telling them I would help them get to Brooklyn, and that we should get out of the area, but we would be OK.

We made our way East and South and when we got to Broadway, turned South to go to the Brooklyn Bridge. Then we heard a loud noise like a subway train or a jet plane was going right down the street. Everyone stopped and looked around.

Then people were running north, towards us, from the south (the WTC, about 6 blocks south and 3 blocks west) I saw some running police and firefighters, running away from the WTC, then more and more people, a big crowd. I lost track of my students. I looked south where the people were running from and saw a huge cloud of smoke and debris (many stories tall, taller than the surrounding buildings) billowing and rushing up Broadway behind the mob of running people. I turned and started running. I saw a pair of high-heeled shoes that a woman must have just abandoned to run faster. Then a lady next to me fell down and people started trampling her. I got behind her and picked her up and she ran away. I thought I might fall or get hit by broken glass so I hid in a doorway and covered my face. Then the leading edge of the cloud was past and the air was dusty but there weren’t people running anymore.

I looked south and I couldn’t see where the Brooklyn Bridge was. Just the cloud of dust. So I turned north. I wanted to get out of Manhattan.

I walked towards Canal Street. People in the crowd were saying that nobody was being let out of Manhattan, that all the bridges were closed by trucks and troops. I thought “I don’t care. They can’t keep me here. I am going home.” I got on the Manhattan Bridge. As I was walking across I looked back and saw only one tower of the WTC standing. Then I heard that subway sound again and I looked again and saw the second building coming down. People in the crowd were saying that more planes were coming, and that they were going to attack the bridges next. I kept looking over the edge of the bridge to check the distance to the ground in case I had to jump.

I walked all the way to Brooklyn, and kept trying to call Beth on my cell phone until the battery died. When I found a pay phone with not a long line, I tried that, but the call wouldn’t go through.

So I just walked the rest of the way home. I was covered with the dust and ashes, and when I walked in I had to keep telling Beth that I was OK. Then Beth went to get Julie at school. I am just so happy we are all OK. (alternating with incredible anger at the bastards who did this, and those who are celebrating our grief and fear)

I talked to a lot of people, and I saw a lot of New Yorkers comforting each other, even strangers. At one point I was having some trouble breathing (mostly anxiety, some asthma) and a guy came over and helped me. Then I was OK, and I said thanks, and he walked away.

I feel so bad for the many people who lost loved ones.

Just thought I’d write it all down.

Time Magazine lists 10 Newspapers that will either Fold or Go Under Next.

They give their reasoning for each one in the linked article above. It could be they’re right, even about all of them.

But here’s something I notice…I read this list because of a link from one of my twitter community–somebody I don’t know in “real life” at all. He linked to this Time Magazine story. On Yahoo News (where that link above is going to). And Time is actually just taking it from 24/7wallst.com.

So if I’m counting right, this story reached me only after being re-purposed 4 times from its original source. And now it’s reaching anyone reading this after a 5th.

(And by the way, I can’t think of a time in the past 10 years or more when I’ve actually bought a paper copy of Time Magazine–or even touched one except when stranded in a doctor’s office with nothing else available.) 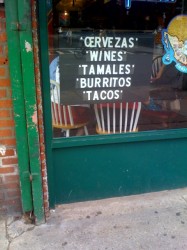 Even with ongoing health issues, I still enjoy everyday absurdities, which is why I’m a big fan of The “Blog” of “Unnecessary” Quotation Marks.

It’s not a terribly mean grammar “gotcha” site. It’s really just for fun, and many of the finds are quite hilarious.

So I sent in a photo of my own–a sign that I noticed right here in Brooklyn. And today it was posted! This is a measure of fame that I can handle–first name only, and just plain silliness!

(I saw another classic–the “all you can eat” pancake breakfast, over the weekend, but didn’t snap a photo).

This just came up a week or so ago, and I’ve been working very hard to help make it happen. Now it’s on!

Tomorrow night ABC News Now (their online news service) will be showing live interviews with students from across the country…including four of ours!

Got the lighting and background and sound and video working today (at least in a test) and I think it will be very cool.

I’ll be there, hoping for no glitches, and fixing them as they occur, and making sure everything goes smoothly, so I won’t be able to watch it myself…but I hope many others (35 million?) will check it out. 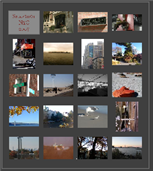 A few weeks ago, on November 11 (11/11, get it?), all the Macaulay freshmen took photos to represent their view of NYC. It’s a great range of images, some captured on camera phones at low resolution, some of neighborhoods and streets, animals, eyes, people and subways. Then they uploaded them to an online gallery we set up, so they could rate and comment on their classmates’ photos. Now (starting tonight), they’re having a brick and mortar gallery show in the Macaulay Center. Student curators assembled, grouped and hung the photos (with lots of technical and practical help and late hours from Macaulay staff), and now they get to walk among them, look at them, talk about them, and hear guest speakers and enjoy light refreshments.

I’m impressed by the event, and I love looking at the photos. And the students’ captions. And their comments! Each year we get new freshmen, and a new group of views of the city.

Know How to Ask

In the course I’m co-teaching in the CUNY Graduate Center’s Interactive Technology and Pedagogy program we’ve been talking about some of the skills and tools that students need to know and use in the media universe. We discussed (it was a digression, as I remember) how access to information sometimes can be a curse as well as a blessing, if students don’t have the appropriate questioning, critical, and researching skills.

And then serendipitously I was reading Robert Silverberg’s Nightwings (I read the first part long ago, when it was a Hugo-winning novella, and only recently discovered that Silverberg had added another whole section to expand it into a full novel.)

Any citizen has the right to go to a public thinking cap and requisition an information from the Rememberers on any given subject. Nothing is concealed. But the Rememberers volunteer no aid; you must know how to ask, which means you must know what to ask. Item by item you must seek your facts. It is useful for those who must know, say, the long-term patterns of climate in Agupt, or the symptoms of the crystallization disease, or the limitations in the charter of one of the guilds; but it is no help at all to the man who wishes knowledge of the larger questions. One would need to requisition a thousand informations merely to make a beginning. The expense would be great; few would bother.

For larger questions, neither the Rememberers nor the internet can be of much help…at least not without the real skills, almost enough to be a Rememberer, or more than a Rememberer, yourself.