The University of the Future 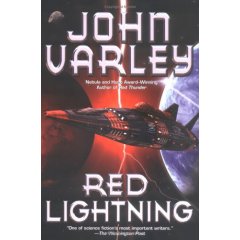 Just finished John Varley’s excellent new novel Red Lightning, and one passage really deserved quoting. The narrator is a seventeen-year-old (maybe eighteen at the point of this passage), just graduating from Burroughs High School on Mars.

His description of his plan for his college education is a near-perfect match to what my favorite art historian has been saying in several posts.

As usual in SF, Varley is commenting more on what’s going on now, then what will be going on then, and the approving nature of that comment made me want to quote the whole passage, even though it’s a long one:

Blame it on the web, like so much else. These days you could attend classes virtually. The universities resisted it, but eventually they were confronted by a de facto situtation, and gave in. You no longer have to go to Boston to attend Harvard. If you know enough to log on to online classes you can become a web freshman. No entrance exam necessary. Hooray for equality!

And there’s practical, and there’s impractical. There’s nothing to prevent you from attending an advanced seminar at the Sorbonne, everything but some highly select honors courses is webcast these days. That doesn’t mean you will understand what they’re talking about. so all but a few supergeniuses start out in the traditional way, with Physics 101 or Introduction to African History, and work their way up. When you think about it, it’s good for everybody. The geniuses can proceed at their own pace, and they can do it from Manhattan or the rudest sheet-metal hut in Calcutta. People who never had a chance to see so much as a blackboard in the past are now able to get an Ivy League education, if they’re up to it. Excellence can now actually select itself in academia, at least until the point where you actually arrive on campus and are faced with prejudice and politics and academic bullshit. Or so I’ve read, in researching the pluses and minuses of web school. Mostly pluses, to my way of thinking, the big one being that I could stay on Mars for a few more years, at least, just like that boy or girl in Calcutta doesn’t have to figure out how to pay for transportation to and lodging in Paris.

But eventually, the different levels of equality come into play. You can get a degree from Stanford and never leave your igloo in Nome, but it’s not quite the same kind of degree you’d get if you lived in the ivy-covered dorms. The sheepskin itself will look identical, but simply by googling the student you can find out if her or she actually attended in the flesh. So, people being what they are, an Attending Degree, or AD, was more prestigious than a Web Degree, or WD.

But there’s a remedy for that, and so far as I can tell it adds up to what Mom calls “that rarest of human institutions: a meritocracy.”

You can start out as I plan to, attending classes via the web. You get graded like everybody else. Then, if you look like Hah-vahd material–that is, if you are smarter than some of the legacy admissions already there–you will be invited to attend in corpore. Doesn’t matter if you’re our boy from Calcutta, or a girl from Chad, or some poor child who actually lives in Boston but never had a chance to attend a good school.

As for picking a school, there’s another alternative these days, and it’s what I’m leaning toward.

If I’m going to be on Mars anyway, what do I care about singing “The Whiffenpoof Song” with a lot of drunken Elis? I’d never make the rowing team to bring glory to dear old Cambridge. I don’t give a hoot about either American football or real football. Other than reasons like that I don’t see the point of identifying myself with any particular school. In this academic strategy, you simply attend the classes that appeal to you. On Monday morning you can be in a class in Johannesburg, follow it up with a seminar in California, and that afternoon attend lectures in Japan and Buenos Aires.

If a certain professor turns out to be boring or incompetent, just stop going. Professors hate this, they call it the Neilsen Rating system of education. It’s mostly the ones whose web attendance is low who complain, though.

You can cobble together your own educational strategy, chart your own path, design your own specialty, if you wish. You may not even want to pursue a degree, you may just want to learn sutff and go from there.

That’s really what we’re seeing the beginning stages of right now. Varley seems to be implying a little more synchronous contact in these classes than I think is going to be ideal or common. But he’s not quite explicit about that, and thinking further, he is talking about distance learning from a pretty huge distance (Mars), and the speed-of-light limitation alone would have to require that the courses be asynchronous. Generally, though, he’s got the right picture, and the plausible extension of it that he provides could be a roadmap, or at least a guidepost, for the directions we’re heading. Not utopian directions (especially not in the novel as a whole), but positive ones, generally, nonetheless.

It’s a very fun book, even beyond this one (sort of a throwaway) prognostication, with some great gadgets, well-developed colonial society, gripping post-tsunami landscapes, evil post-nationalist governments, plenty of 9/11 references, and much more. The fact that it’s narrated by a teenage boy makes comparisons to Heinlein’s juveniles unavoidable. Varley gets compared to Heinlein plenty–he has a similar libertarian strain (some very strong Second Amendment rhetoric in this one), and a similar tendency to sneak in lectures without letting them bog down the plot or detract from the likable and eminently competent characters. Like Heinlein’s juveniles, this one would work very well for teenage readers (and I don’t think the sex and drug use should change that at all–although Heinlein’s editors, but not Heinlein, would probably disagree with me on that). And it also works very well for this adult reader.

Red Lightning is a sequel to Red Thunder, and it really made me want to go back and re-read that one. Unfortunately, I can’t find my copy! Looks like I may be placing another order with the SFBC soon.

Categories: Books and Websites, school 2.0, Teaching and Learning with Technology

2 thoughts on “The University of the Future”